Our alumni chair Thomas Hungerford ’19 and his committee of Alex Lee ’20, Nick Beirman ’19, and Pat Finley ’20 coordinated our chapter’s engagement with Habitat for Humanity. This October many of our brothers volunteered to rake lawns throughout the greater Charlottesville area in support of Habitat’s Bridge Project, a project in response to the events here on August 12. The photograph to the right shows us raking with sorority Sigma Psi Zeta.
In addition to this philanthropic activity, the chapter has developed a new system to incentivize more involvement with the community. For every three hours that a brother is able to validate with the chapter, he receives a house point, which is used for room selections when living in the house. Our hope is to incentivize younger classes to begin volunteering as a way to earn house points and then to continue this community service throughout their time at the University. In the spring, we will be having another philanthropy week and look forward to improving the events from last year. This past summer, second-year brother Oluwatimilehin Ayoh ’20, also known as “Timi,” completed a project he had been working on for years. Timi was just 13 years old when terrorists attacked multiple houses of worship on Christmas Day in Nigeria. On that day, referred to by newspapers as “Hell on Christmas Day,” St. Theresa’s Catholic Church, which once stood just 25 miles from Timi’s hometown, was in ruins. Devastated by the tragedy, Timi sought to help. Realizing that the school’s library had been destroyed and that books are vital to an education, Timi decided to donate his own books to the school. But Timi didn’t stop there— he wanted to help further. His father referred him to the technology company SystemSpecs. With Timi’s help, SystemSpecs took over the project and funded the rebuilding of the entire school.
Six years later, the school has impressive new facilities such as science laboratories and of course, a new library, which serves as the centerpiece of the school. Timi visited the school this past July for a ribbon cutting ceremony, at which Timi, as well as the school’s students, saw the library for the very first time. The library is named “Timi Ayoh’s Library” in his honor. The UVA Men’s Club Soccer team and its six members in Phi Psi finished off another successful season this fall. Michael Katz ’18, Club Soccer President, and fourth-year Phi Psi, led the team to its second consecutive NIRSA National Championship Tournament, which was held in Phoenix, AZ. The team ultimately fell to the University of Wisconsin in the sweet sixteen, but the season was still extremely successful
Phi Psi fourth-years, Michael Katz, James Green, Brian Leibowitz, and Peter Johnson all enjoyed their last season playing with their fellow brothers on the team. The fourth-years led the club well and leave big shoes for Phi Psi second-years Ian Roberts and Duncan Wrenn. “I really learned a lot from Michael’s public speaking, organization, and perseverance”, Ian said. Ian and Duncan look forward to continuing the team’s success, taking on leadership positions next season, and getting more brothers involved.

Successes in the UVA Community

Our chapter had another successful year throughout the university and charlottesville community. We had a strong increase in our philanthropic efforts this year  as we focused our attention towards Relay for Life and Charlottesville’s Sexual Assault Resource Agency (SARA). Our academic standing also improved, as our GPA is now ranked fourth among all 31 fraternities, rather than seventh. We are quite proud of what we’ve accomplished in the wake of Rolling Stone, and the work that we will continue to do.

Many brothers achieved great honors throughout the year as well. Rylan Collier and Austin Curtis were both nominees for the Raven Society Scholarship in the McIntire School of Commerce. Van Spina was awarded the Winston “Win” Tate Award by Phi Psi Nationals. This award recognizes two brothers who demonstrate excellence in business. Van also placed Top 5 in the Portfolios with a Purpose challenge earning $2,000 for the Alternative Investment Fund (AIF) and $1,000 for a charity of his choice. Daniel LaBarbera was elected as President to the acapella group, The Hullabahoos. Our initiative to get brothers more involved in the IFC has paid off, as many have key roles within the various committees. 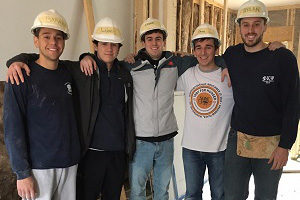 The chapter had three major philanthropy goals this semester. First, we wanted to continue engaging the community at a small scale through Habitat for Humanity. This first goal was completed, as Daniel Labarbera worked hard to continue our relationship with Habitat for Humanity and get more brothers involved in certain events, like their build days. Our second goal was to expand our engagement with Relay for Life, a cancer fundraising group, within the chapter, amongst our friends and family, and the  greek community. For our third goal, we wanted to host community friendly events to help raise money and awareness for Charlottesville’s SARA (Sexual Assault Resource Agency). Overall, we are extremely proud of the steps we took to increase our philanthropic presence in the Charlottesville community and look forward to having an even greater impact in years to come. 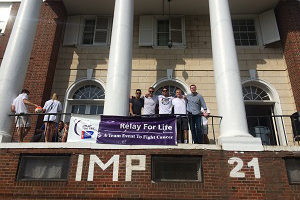 We blew our second goal out the water thanks to amazing leadership from Brian Leibowitz. Last year, he helped create a team of 30 brothers and raised about $7,000. This year, we stepped it up a notch and teamed up with Delta Gamma to create a team with 150 members, by far the largest. As a result, we raised $17,000 dollars through a combination of t-shirts, spin classes, beer nights, and family and friends. We even hosted the first ever Greek Olympics Relay which had 15 fraternities and sororities involved. On top of these group efforts, Brian himself was the third highest fundraiser at UVA. However, this still wasn’t enough and he reached out to his brothers to further Phi Psi’s involvement. As a result, we are proud to know that we will have 10 brothers serving on different relay committees next year! We’re looking forward to doing even greater things with Relay for Life, and are hoping to get our alumni engaged in this great cause.

Our third goal was another great success. For the first time ever, we hosted a philanthropy week with multiple events. Throughout the week, we sold T-shirts and set up booths around grounds to raise awareness for SARA and their mission. On Thursday of that week, we rented an inflatable screen, projector, and speakers, and hosted a movie night on madbowl that was open to the public. On Friday, we hosted a Spikeball tournament on madbowl and as people came to watch, we talked to them about SARA and why we were hosting the tournament. Lastly, on Saturday we hosted a slip and slide on madbowl that had a great turnout despite some rainy weather. After covering expenses for the fundraising, we were able to donate over $2,800 dollars to SARA! We’re extremely proud of our first attempt at a philanthropy week, and Daniel LaBarbera will be serving as a co-philanthropy chair to help continue his great work.