Expansion began for Sigma Nu in 1870 after the graduation of the Founders, when the mother chapter at VMI, then known as Chapter I, approved the establishment of a chapter at the University of Virginia. Later, a permanent numbering system established a Greek-letter designation for chapters. Thus, Chapter I became Alpha and the University of Virginia chapter became Beta.

From its s founding until the mid-1890s the Beta Chapter remained small, with some 10 to 15 brothers, many of whom were graduate students attending UVA’s Schools of Law and Medicine. There were 10 brothers in the 1888 chapter, with only two undergraduates. Of course, only 365 men were enrolled at UVA that year, so the Beta Chapter was average in size. Among the chapter’s brothers was Dr. Isadore Dyer (B 18),  who attended was a Beta Chapter brother in 1887-89, an editor for the first Corks and Curls in 1888, and was elected Sigma Nu Regent in 1895 and a  member of the Sigma Nu Hall of Honor. An 1895 letter to the Delta notes that the Chapter was 13 members strong, still largely medical and law students, with two brothers on the football team.

The Beta Chapter, as with most UVA fraternities, remained small during the first five years of the new century. In 1900, there were 11 brothers in 1900, with six undergraduates. By 1905 the Chapter was largely defunct, however, in 1906 it was revived, opened its own chapter house, and was paid a visit by  Regent and Beta Alumni Dr. Dyer who assisted in this effort. The  chapter inducted some 30 brothers between 1906 and 1908. The Chapter remained a strong presence on the UVA Grounds, with brothers living in a boarding house on Madison Lane, and its ranks including varsity athletes, the captain of the UVA basketball, baseball and football teams, scholars, UVA Law and medical school students and student leaders in all areas. All UVA fraternities saw their number decline with U.S. entry into World War I. In the 1920s the Beta  Chapter grew steadily. The 1920 brotherhood numbered thirty-six, making the Beta Chapter among the largest five-six fraternities on Grounds. Chapter size increased to forty members during the late 1920s, entering the 1930s.

Fraternity activities were criticized from the beginning for excessive alcohol consumption and general rowdiness and were often considered inappropriate. In an effort to both accommodate and control them, the University offered a portion of Carr’s Hill for fraternity house development. However, the Board of Visitors stipulated that the houses were to be designed in an architectural style similar to  UVA’s own, and asserted its ability to reprimand the organizations for bad behavior and misconduct.

The Sigma Nu fraternity brothers’ first house was a former boarding house located on Madison Lane. Built by Eppar Rixey, Jr., the house was a large, rectangular structure with wrap-around porches on either side. Rixey, a University alumnus who later played professional baseball and was inducted into the Hall of Fame, used his earnings to build the house for his family to run as a boarding house. The fraternity lived in this house from 1919 to circa 1928. 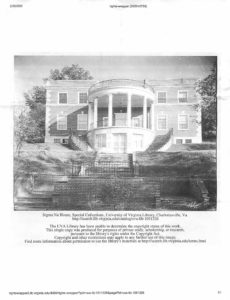 The Chapter moved to its new quarters virtually with the onset of the Great Depression. The Chapter’s annual membership remained strong at about  50 throughout the 1930s until the advent of World War Two. Its ranks included numerous student-athletes and leaders, scholars and eventual doctors, lawyers and business leaders.

Following the war, the Chapter quickly grew, with 22-member pledge classes initiated in 1947 and 1948. Growth remained strong into the early to mid-1950s with numerous varsity athletes numbered in the Chapter’s ranks.  Among those standouts were Henry Jordan ( B 754) Captain of the UVA football team ( and  All America wrestler) an all-pro defensive tackle on five Green Bay Packer teams that won National Football League championships in the 1960s, Dr. Nelson Yarbrough (B 756) was a teammate and the starting Cavalier quarterback in 1956 (as well as cornerback and punter).

Continuing into the 1960s the Beta Chapter became known on Grounds for having the largest number of varsity athletes of any UVA fraternity. It also produced many student leaders and scholars. Beta Chapter brothers between 1956 and 1970 included five captains and five starting quarterbacks on the Wahoo varsity, along with 45 other varsity letterman in football, baseball, lacrosse, swimming, wrestling, soccer, and track. A good number of brothers were inducted into scholarship honorary societies, such as Phi Beta Kappa, and others went on to graduate from Harvard Law, UVA Law, Columbia Law, UVA Medical, Harvard Medical Schools and other prestigious medical, business, and law schools. With a trend starting in the 1980s and continuing with the newly chartered brotherhood, of having a significant number of McIntire School of Commerce brothers, current alumni include numerous executives with banks, private equity, brokerage and financial advisory firms on Wall Street and CEOs throughout the country.

The Beta Chapter included various UVA student leaders in all areas, including the Inter-Fraternity Council, Madison House, and the Residential Advisor Program. Three brothers were elected to the prestigious Z Society from 1966 to 1968 [Scott Montgomery, Commander (lacrosse team captain) (B909), Mal McGregor (varsity football captain) (B 923) and Larry Molinari (varsity football 1966-67 (B896)] and several were inducted into the IMPs and other secret societies. Brother Al Groh (B 905), a varsity football player went on to fame as a professional football coach of the New York Jets and Giants and was the Head Coach of the Virginia Cavaliers from 2001-2009. Bob Kowalski (B) was Chapter Commander and football team captain in 1966, before going on to a career with the NFL Detroit Lions where he started as a tackle for ten consecutive seasons and became a pillar of the team and the Detroit community. A number of brothers served in the Korean War and at least five in the Vietnam War.

Beta Chapter alumni during this period include at least twelve physicians, including those on the faculties of major teaching schools, scores of attorneys and MBAs, as well as leaders in secondary school and college education, psychologists, ministers, engineers, and successful businessmen. On Grounds, Beta Chapter was known for its strong presence on student publications, such as the Cavalier Daily, engaged volunteer efforts and for maintaining high ethical and academic standards. The Chapter also kept hard well-earned reputation in throwing legendary parties and being a welcoming and engaged fraternity. In 1969, with the advice and assistance of Regent Dick Fletcher, who visited several times from Lexington meeting with chapter leaders, the Chapter reconstituted its pledging education, and had strong pledge classes, which anchored the Chapter well into the 1970s and beyond.

In the early 1980s, UVA adopted a plan to enhance long-neglected fraternity housing. The fraternity housing areas, including Carrs Hill Rd., was declared a historic district through the effort of the City of Charlottesville. The University formed and capitalized the Historic Renovation Corporation (HRC) to act as the sole general partner in a series of limited partnerships set up to renovate the houses, including the Beta Chapter. By the summer of 1986, the limited partnership formed to renovate the Beta Chapter completed extensive renovations to the Beta Chapter house. The prior attic space was converted into a floor of housing with eight new bedrooms, a meeting area, and a gang bathroom. Extensive renovations were made throughout the house and grounds. Alumni involvement was key to this project and the generous financial contributions of  alumni brothers Kenny Thompson (B705),  Edgar Lawson (B673), Dr. Nelson Yarbrough (B756), and Randy Williams (B), along with the important role of the House Corporation (The Hopkins Society) led by alumni brothers Lloyd Smith (B713), Gordon Wester (B652), Dr. Fred Hamer (B625), and Bill Stone (B935).

Concurrent with the renovation fo its historic house, in the 1980s saw the introduction of the new Sigma Nu risk reduction policies. The Beta Chapter was in the forefront not only of historic house restoration but of the renaissance in fraternity programming at UVA. One of the Beta Chapter’s greatest alumni support in this effort was the late Richard M. Marcks (B675), the former CEO of Hersey International and Life Director of the Sigma Nu Educational Foundation and inductee into the Hall of Honor In 1986, Brother Marcks was asked by the Educational Foundation of Sigma Nu to design, develop, fund and implement an ethical leadership program for new initiates. As chairman of the Sigma Nu LEAD Program and Campaign, he worked closely with Beta Chapter to institute the LEED program into initiate training.

In the 1980s and early 1990s, the Beta Chapter become known for several years for its “Coffeehouse” jam sessions held late into the evening in its basement. Included in these late-night music sessions were early performances by Dave Mathews, as the brotherhood included Boyd Tinsley ( B  ) as the violinist for the band. With the reorganization of the UVA Arts District, the Chapter House’s new address became 189 Culbreth  Rd. in the early 2000s (to the dismay of many alumni).

The Chapter, as with many fraternities at UVA, encountered some economic uncertainties in the 1990s, causing it to be re-chartered in 1994. Following the successful re-colonization effort lead by alumni brothers Deke Ealy (B) and Allan Mccleaf, (B) in 1994, growth soon followed with some 55 initiates in 1995-96. The Chapter was vibrant and well recognized on Grounds in the later 1990s, continuing into the new century.

The Chapter was re-colonized in 2018, after having its charter revoked in 2014 for violations of UVA’s anti-hazing policies. With a strong recruitment and leadership by national headquarters and Beta alumni, from the spring of 2018 until the fall of 2019, a successful re-colorization effort resulted in a 55-brother strong chapter by October 2020, when the chapter was re-chartered. The House Corporation during these years oversaw efforts to renovate the chapter house as funds permitted.  Currently, the house is  fully tenanted with 22 brothers and 64 active brothers.