Years in the CMB: 2009-2013
Instrument: Horn
Location: Charlottesville, VA
Kelly recently returned “home” to Charlottesville to join UVA’s Office of Advancement as Associate Director of Development for University Priorities. She also serves on the Board of Directors for Avalon Center, a domestic violence shelter and outreach center in Williamsburg, VA. Kelly is a RYT-200 certified yoga instructor and loves her new daily opportunity to take in the Blue Ridge Mountains with her husband and Shetland Sheepdog, Piper (their cat, Julep, prefers the scenic view of the coat closet). Although she can only very poorly play the mellophone now, she does still pick up her flute and performs in local ensembles. Kelly is honored to serve as Chair of the CMBAA for the 2021-22 term and is excited to give back to the CMB in this way. Go Hoos AND WAHORNWA! Years in CMB: 2004-2008
Instrument: Trombone
Location: Richmond, VA
Matthew graduated from the A-School at UVA in 2008 and received a masters in real estate from American University. A native of Charlottesville, Matthew worked in DC area property management before moving to Richmond with his husband and pup in early 2021. He now works for CoStar Group and is loving exploring a new town and being close to CVille. The ultimate Wahoo, Matthew is a season ticket holder and loves going to as many football games as possible to see the CMB in action! Go Hoos! Years in the CMB: 2008-2012
Instrument: Clarinet
Location: New Orleans, LA
Kellen is loving living in the Big Easy and works as a lab manager for an environmental consulting company. She is excited to be involved with UVA and the CMB again, as Kellen has many wonderful memories and lasting friendships from her years in the CMB. Go Hoos! Years in CMB: 2010-2014
Instrument: WAHORNWA
Location: San Francisco, CA
Meghan is a diabetes education nurse specialist at UCSF. She and her fellow-Hoo husband got married this past summer, and their honeymoon was driving across the country and hitting up some national parks and landmarks. Meghan highly recommends the Corn Palace in South Dakota. “10/10.” For Meghan, the CMB eased her transition into college from high school and gave her some of the greatest friends she could ask for! She is excited to be a part of the CMBAA and give back to the organization that meant so much to her during her time at UVA. 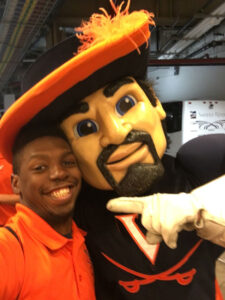 Years in the CMB: 2013-2017
Instrument: Trumpet
Location: Charlottesville, VA
I am a native Mississippian and moved to Virginia in the year of 2011 with my family to finish high school. I am currently working a full-time job at a private school in Troy, VA while working on getting a music degree at PVCC. I had become very interested in joining the band since my very first UVA game and was willing to help out in any way possible after my years of service in the band. The CMB has its own unique way of performing, and that is what I like about the band. Fun fact is that I played notes as high as I could on trumpet while in the band and enjoyed every moment of it and really did enjoy myself going and playing at my first ever Macy’s Thanksgiving Parade in the year of 2015. Years in the CMB: 2017-2021
Instrument: Piccolo
Location: Currently Columbia, SC, but moving to Washington, DC soon
Mariah is currently working as a security analyst intern for a bank in South Carolina. She majored in computer science and is interested in the cybersecurity and government fields. Mariah was a member of Kappa Kappa Psi (KKPsi) during her time in the CMB. She loves the CMB, because it gave her a community in college unlike any other she had ever experienced. Years in the CMB: 2014-2018
Instrument: C-net
Location: Poquoson, VA
Catherine is now pursuing a PhD in Biomedical Engineering at Purdue University, where she now sits in the student section at football and basketball games and gazes longingly at the band.