Today, the Center’s office space is provided by Newcomb Hall while the salary and benefits for the LGBTQ Student Services and Center Coordinator are fully funded by the Office of the Dean of Students. Since then, the Society has provided recurring annual financial support in the form of grant funding to support program and services.

In the most recent fiscal year ended June 30, 2015, The Center received only $9,700 from the state of Virginia and those funds are limited by state laws/rules that restrict much of the spending toward many programs, services, and student organization support. In the past, these funds were spent on marketing materials and program supplies.

During the same period, the Center received $10,000 as the first installment of a 3-year Social Venture Initiative Grant from the Susan A. and Donald P. Babson Charitable Foundation. In fact, this is the second 3-year, $30,000 grant from the Foundation; the first was made in 2011 at the suggestion of U.Va. alumnus, Bernard D. Mayes Award recipient, and Foundation Trustee, Richard L. Babson of Boston, Massachusetts.

Additionally, QVA made a grant of $15,000 to the Center in January 2015. In the funding request, Coordinator of LGBTQ Student Services and Center Scott Rheinheimer wrote,

“Thank you for your many past contributions as you allowed the University to reshape its efforts towards an increasingly visible and dynamic community. Without your support, we would probably not have an LGBTQ Center at all today. With your continued support, we will not only be able to maintain our current abilities, but keep meeting the growing expectations of a newly powerful, vocal minority community in central Virginia.”

Overview of the Center

The mission of the LGBTQ Center is to foster the development of LGBTQ students, faculty, staff, alumni and allies. It works to raise awareness and inclusion of sexual and gender diversities through programs, outreach, and services that support the advancement of the LGBTQ community.

The LGBTQ Center went through a major transition in 2013 and 2014. It started as a resource center providing support, services, and materials to a highly underrepresented population in higher education. Its operating budget was small and solely funded by QVA through gifts from alumni.

Today, the Center occupies to a space four times its original size, provides unpaid internships to six undergraduate students who run most of the programs, and retain 30 volunteers who are the front lines of support to incoming students. The Center conducts Safe Space trainings for the entire Charlottesville region, up to 30 panels made up of LGBTQ and allied people sharing their coming out stories, over 25 programs per year, and support up to eleven LGBTQ-related UVA student groups. It has sought out a better presence in the region by reaching out to community organizations, schools, and local events.

And the Center continues to advocate for highly underrepresented populations, like the transgender and queer communities, by mapping out, and fighting for more, gender-neutral, single-stall bathrooms as well as adding an LGBTQ-identifier question to the admission application.

Recently, the Center has expanded its efforts by providing a wide variety of programs, services, and leadership opportunities to a growing diversity of LGBTQ and ally students. Six undergraduate interns are empowered to expand their leadership abilities to run the Center through different positions including: program development, volunteer coordination, health education, and marketing outreach. The volunteers are encouraged to take on special projects to further their involvement with the leadership of the LGBTQ community.

The coordinator and students have designed a way for the University to measure our recruitment, access, and retention of LGBTQ people by including an identifier in the demographics section of the admission application. We are also pushing the University to provide gender-neutral housing to better support and service our growing transgender and gender non-conforming populations. We are working with the LGBTQ Studies program to map our gender-neutral, single-stall bathrooms on Grounds and in Charlottesville in order to provide more visible options.

These efforts are supported heavily by marketing campaigns, outreach to local businesses, and programming focused on educating the larger community while supporting gender, sexual, and romantic minority communities.

Center programs have grown over the past year as well. Our Pride Week was once a collection of 3-4 events with a budget roughly $2,000. Last year, we provided 2 Pride Weeks filled each day with an activity or event ranging from an LGBTQ brunch hosted on Mr. Jefferson’s Academical Village to spoken word artist, Andrea Gibson. The total budget for these weeks was $9,000, including marketing. We also revived a tradition started at UVa in 1996, the Day of Silence. It had disappeared in recent years, but we are hoping to help set the standard of how the program can be run in a higher education institution. 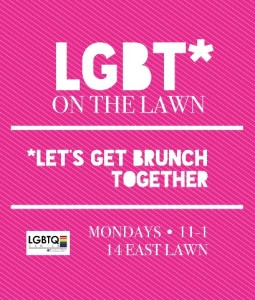 Another widely popular program started in 2013 was the weekly Let’s Get Brunch Together (LGBT) on the Lawn. Students gathered at a Lawn room, in the shadow of Jefferson’s Rotunda, to share delicious food from a local bakery and mingle with other members and allies of the community. Participants, usually numbered in the 60s, were encouraged to network, share information on upcoming events, and relax in a supportive, very UVa environment. At different points in the semester, deans, professors, and local leaders visited. Rep. Gerry Connolly stopped by to “campaign,” as well as Katie Couric and Tina Brown stopped by to say hello and split a pastry. The students gained a visibility and connectedness that has not been matched. This ongoing event cost roughly $2,000 over the full academic year.