History of the Raven Society

In the spring of 1904, a student from Baltimore named William McCully James perceived the need for a new merit-based society at the University of Virginia. The existing social and literary organizations were by nature exclusive, and students had no real incentive and little opportunity to seek friendships outside their initial associations. The student body very clearly lacked cohesion. James, characteristically modest, referred his proposal to a Faculty Committee, recommending that they select twelve students who had worked to advance the University’s interests and, above all, whose scholarship was of unusually high standard. These twelve men should then undertake the formation of the Society and were to be entirely entrusted with the details of its organization.

The Faculty Committee, composed of Professors Tuttle, Minor, and Dabney, sent letters to the first twelve initiates, requesting their presence at a special meeting and explaining their purpose as “a matter of grave importance to both students and faculty.” On April 20, 1904, after hearing the faculty’s proposal, all twelve, honored at their being chosen, solemnly pledged their support to the new society. At this first meeting, the students elected Armistead M. Dobie as their temporary chairman, who then appointed a committee to draft the Constitution and By-laws. After careful consideration and sometimes heated debate, the Constitution was adopted on April 27. In less than ten days, James’ idea had become a working reality.

The group devoted much attention to determining the size of the Society and the qualifications for membership. One of its primary aims, as laid forth in the Constitution, was “to bring together the best men in the various departments of the University for mutual acquaintance and for cooperation in their efforts to protect the honor and dignity of the University.” Its membership, concomitantly, was to include men from every phase of college enterprise. Besides fostering all lines of scholarship, the Society was meant to encourage concerted action by cultivating a broad community of interest and emphasizing leadership and idealistic determination. 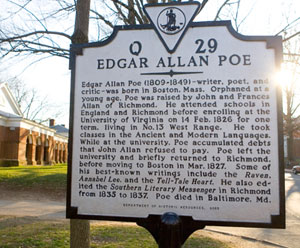 One of the more difficult tasks assigned the original group was the choosing of an appropriate name. Name after name was rejected until finally someone offered “Raven” which soon became the unanimous choice of the Charter Members. Accordingly, students selected to join the Society are awarded membership certificates featuring this emblem. They agreed on this name no doubt to honor the most famous poem of the University’s most famous poet, but many other reasons have since been suggested. Charles Kent, Professor of English Literature from 1904-29, wrote an article explaining why he felt the name to be particularly well-chosen. He claimed that just as the raven is omnivorous in its search for nutriment, so should a Raven be relentless and broad-minded in his pursuit of knowledge. Kent also suggested that members emulate the raven’s soaring flight, achieving lofty goals through the same bold determination and tireless strength.

Despite differing interpretations of its name, the Raven Society has never questioned its initial purpose. Since its founding, the Society has been steadfast in its commitment both to the University and to academic excellence.

In 1907, President Alderman and the Board of Visitors charged the Society with the upkeep of Poe’s old room, 13 West Range. In 1924, Professor Edmund S. Campbell, head of the School of Architecture, led efforts to refurnish the room to make it look more like the student rooms of 1826. Then in the 1950s, the room was again renovated to link it even more closely with its former occupant. A mantel and closets that had been added after 1826 were removed, and an alumnus named A. Churchill Young donated Poe’s old bed from the Allan house in Richmond. Today, the room looks much like it did during Poe’s brief stay at the University.

The Raven Society has sought over the years to honor and promote superior academic and extra-curricular achievement. In 1933, the Society began presenting the Raven Award, which recognizes students, professors, administrators, and alumni for their scholarly pursuits and their dedication to University ideals. The first two recipients were John Lloyd Newcomb and Fenton Allen Gentry. Newcomb was then the much-loved and eminently competent acting-President, while Gentry was, among other accomplishments, a Rhodes Scholar, a member of Phi Beta Kappa, and a Southern Conference boxing champion. Many other inspiring University figures have since been honored with this award–figures like Harry Clemmons, who was kind enough to pay Poe’s outstanding library fine almost one hundred years after his untimely departure.

The Raven Society has furthered its efforts to encourage excellence by sponsoring the Raven Fellowships and now the new Raven Scholars Program. The Raven Fellowship is an annual grant of between $1,000 and $2,500 to undergraduate or graduate students who undertake intellectual and creative projects separate from their regular course load. The Raven Scholars Program will eventually support ten Raven Scholars for a semester of study from each of the University’s schools. Through projects such as these, the Society hopes to fulfill its initial, enduring commitment to the University of Virginia.