Edgar Allan Poe at the University Born in Boston on January 19, 1809, Edgar Allan Poe moved to Richmond just three years later with his mother and infant sister. His mother, a talented actress, succumbed to pneumonia soon after their arrival, leaving her children all alone in a strange city. John Allan, a prominent Virginia merchant, agreed, under pressure from his wife, to care for Poe and to pay for his education. While still a young teenager, Poe received special tutoring to gain early entrance into the new University of Virginia, probably on the recommendation of General John H. Cocke, a good friend of Allan’s as well as of Thomas Jefferson.

Edgar Allan Poe enrolled at the University on February 14, 1826, the 136th of 177 students registering for the second session. He attended classes in the Schools of Ancient and Modern Languages, under Professors Long and Blaetterman respectively. Although not known for spending long hours at his lessons, Poe was already remarkable for his brooding, lonely genius. His excellent memory allowed him to read ahead in class and recite correctly even when utterly unprepared. In his final examinations, he took top honors in French and Latin and was cited for excellence by both professors.

Only in class from seven until nine-thirty each morning, Poe had ample free time to explore Charlottesville and participate in University activities. He was elected to the Jefferson Literary and Debating Society on June 17, 1826, and once served as its Secretary pro tem. Shortly after joining, he read an essay on “Heat and Cold” and probably took part in the many lively debates of the term. Although he did not regularly present original work to the Society, he often entertained his closest friends with private readings in his room. According to George Douglass Sherley: 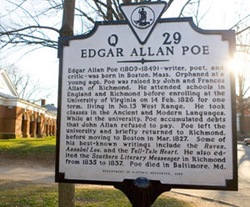 His little room on the West Range was often filled with a small, select audience of his most particular friends, who, spell-bound, scarcely breathed while they eagerly listened to some story – strange and wild like all the rest – that he had just written and which he read with his whole soul thrown into every action and intonation of his voice – now loud and rapid like the mad rush of many waters, and now sinking into a scarcely audible whisper, of some terrible sentence of incantation or curse sending a shiver over all that heard.

Generally well-liked, Poe was considered talented, if slightly odd by his peers. Once when he read a short story written specially for his friends, someone laughingly claimed that the hero’s name, “Gaffy,” was repeated too often. Before the others could object, Poe hurled his manuscript into the fire, thereby earning the longtime nickname “Gaffy” Poe. This nickname, though never relished, is said to have followed him all the way to West Point five years later.

In the University of Virginia Library’s WWW Exhibit “Arise and Build” a letter is displayed, written by Poe and addressed to John Allan, dated September 21, 1826. His letter bemoans the approach of finals and the many hours spent studying. Poe also writes about the continuing construction of the University, noting that the Rotunda was almost completed. He closes his letter with an account of a particularly nasty altercation between two students. Such was the life of a student in the nineteenth century.

Although a gifted and popular student, Poe left the University on December 15, 1826, never to return. The funds his stepfather had sent him were woefully inadequate despite his many pleas for more assistance. He was forced to borrow on credit from Charlottesville merchants and then turned to heavy gambling in an attempt to pay his bills. Unfortunately, Poe was extremely unlucky at cards, and by the end of the ten-month session, had amassed a debt of over $2,000. John Allan, who disapproved strongly of gambling, was furious with his stepson and refused to allow him to return to the University. On his last night in Room 13, West Range, Poe spoke earnestly with William Wertenbaker, the University librarian, of his deep regret and declared that he was honor-bound to pay every last cent at his earliest opportunity.

A pane of glass taken from the window of Room 13, West Range, is on display in the University’s Rotunda. According to legend, Poe etched the following stanza into this pane sometime before his unfortunate departure:

O Thou timid one, let not thy

Form rest in slumber within these

The ghost of an awful crime.

After returning to Richmond, Poe was trained as a clerk and put to work in his stepfather’s counting house. Frustrated by Allan’s stifling authoritarianism and sarcastic contempt for his writing, Poe secretly sought independence and applied for other employment. Upon discovery, he was heartily denounced as an ungrateful wretch and ordered from the family home. He soon moved to Boston, in 1827, where his first book Tamerlane and Other Poems, was published the very same year. It was not until the 1845 publication of “The Raven” however, that Poe achieved any real national prominence. Although famous almost overnight, he remained desperately poor, for without copyright protection, the countless reprints brought him nothing. He died just four years later, on October 7, 1849, and despite his short life, is today recognized as one of America’s most brilliant poets.

His enduring influence is evident in the number of visitors drawn each year to the University of Virginia just to get a glimpse of Poe’s Room and hear the stories of his early days. Although his stay at the University was regrettably brief, it is natural to wonder how his time here helped shape his later life and works. He wrote “Tamerlane” while still a student, and in both this poem and “A Tale of the Ragged Mountains”, he refers explicitly to his experiences in Charlottesville. President Alderman, in an address during the Poe Centenary celebrations, surmised that the youthful promise of the place could not have failed to help inspire him. Many scholars have long suggested that two lines of his classic poem, “To Helen”, may reflect his feelings about the University of Virginia’s historic Lawn. Published in the Poems of 1831, “To Helen” was probably written soon after he left the University and may contain an allusion to the Greek and Roman architecture of the Lawn.