Delta Kappa Epsilon was the first fraternity to be established at the University of Virginia and is the oldest fraternity in the Commonwealth. Founded as the Eta Chapter by seven students on November 26, 1852, it initiated a Greek system that today numbers over 50 fraternity and sorority chapters. DKE was also the first fraternity at twelve other universities and its national membership has produced five Presidents of the United States, four Vice Presidents, three Speakers of the House, and three Supreme Court Justices.

Virginia’s Eta chapter numbers among its alumni two United States senators, five members of the House of Representatives, two state governors, a Secretary of the Navy, an ambassador to Switzerland, a president of the University of North Carolina, a Pulitzer Prize winner, two city newspaper editors, and three Rhodes Scholars.

The DKE House membership has always been diverse. Members have come from 40 different states and 4 foreign countries. The House is famous for its selectivity. It seeks no particular number (it is one of the smaller houses at the University) and there are no automatic admissions, not even for descendants of alumni. Today’s brotherhoods generally total in the 40s and 50s, but the average for the first 15 decades was less than 11!

While the city has changed the DKE House address in 2003 from 1820 Carr’s Hill to 173 Culbreth Circle, the house remains in the same location it has been since 1914. Those who climb the famous 31 steps that lead to the house on Carr’s Hill and join its ranks, inherit a distinguished and unrivaled legacy of leadership and contribution to the University and community that continues today as it has since the first decade of its existence. 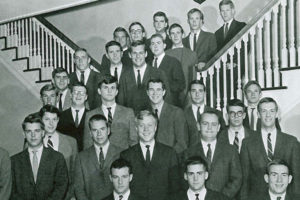